Autumn migration in cape Põõsaspea in 2019 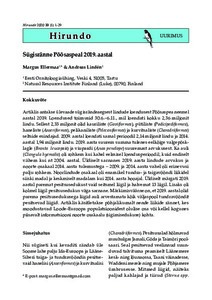 This article provides an overview of waterbird autumn migration (Gaviiformes, Podicipediformes, Anseriformes, Pelecaniformes, Charadriiformes) monitored at Cape Põõsaspea in 2019. Cape Põõsaspea lies in Estonia, in the South Western part of the Gulf of Finland, Baltic Sea (59°13’N, 23°30’E). The survey was carried out during 130 subsequent days, between 30th of June and 5th of November, covering on average 13.2 hours per day (figure 1). The survey was similar to those carried out in 2004, 2009 and 2014.

In total, 2.33 million migrating waterbirds were counted at the monitoring point, including individuals from several species that nest in the arctic, subarctic and northern taiga (table 1). The season total for observed birds was higher than in any previous year mainly due to high numbers of barnacle goose (Branta leucopsis) of which 302 000 individuals were counted in total. Additionally, none of the abundant species were observed in low numbers in 2019.

About 728 000 of all counted birds were aged in order to study the proportion of juveniles (approximating breeding success). Additionally 87 300 birds were classified as female-plumaged (see explanation below).

Variation in the observed number of migrating individuals separated by plumage (or age if possible) was analysed statistically on a pentad basis (in five-day periods), one species at a time. In total, 15 species were analysed (table 4). The fitted models estimated the differences in average bird numbers between years (2009, 2014 and 2019) and plumages, accounting for migration phenology (the seasonal pattern of migration) by plumage. The proportions of the plumages was either presumed to be constant between years (model 1), or allowed to vary annually (model 2).
Whenever possible, the birds were separated by age, so that changes in the proportion of young (1st cy) birds indicate relative breeding success. However, in four species the juveniles and adult females are similar (velvet scoter Melanitta fusca, long-tailed duck Clangula hyemalis, red-breasted merganser Mergus serrator) and Eurasian wigeon Anas penelope). In these species the number of female-like birds (1st cy birds and +1 cy females) – instead of juveniles – was examined in relation to adult males. The separation into age (1st cy, +1 cy) or plumage classes (female-like, adult males) is hereafter referred to as “plumage”.

Before the analysis, the numbers of migrating individuals of a certain plumage were “corrected”, by summing the counted numbers identified to plumage/age level with the numbers of unidentified individuals, multiplied with the focal plumage proportion (in the identified part of the data). This procedure was done separately for each species and pentad.

The analyses of migrating individuals by plumage were done species-wise using generalized additive models (GAM) with log-link and negative binomial error. The response variable for a given species was the corrected number of birds of each plumage group in each pentad. In the model 1 the explanatory variables “Year” and “Plumage” were both included in the model as categorical variables (factors), the middle year 2014 being defined as the base-year (intercept). Further, migration phenology was accounted for by including smoothing functions (thin plate splines) of the continuous variable “Pentad”, fitted separately by “Plumage”. To study variation in the proportions of the plumages, and hence breeding success, the model 2 was fitted by additionally including the interaction “Year * Plumage” in the model. Interpreting the interaction terms as effects of reproductive success, however, relies on the assumption that the proportion of young does not vary due to e.g. annually varying age-specific migration routes.

Models 1 and 2 both assume that the migration phenology is the same between the years for each plumage. While this is surely not the case, strictly speaking, the model should still identify clear patterns of abundance properly, as long as the general phenological pattern holds approximately and the between-year phenological shifts are fairly small. This is an assumption that can be amended with a more complex model in the future (e.g. using factor smooths), when data accumulates and trend analyses become timely. Residual autocorrelation in all pairs of two consecutive pentads (pentad totals of tested species) was investigated with a χ2-test for independence, classifying the proceeding and latter pentad residual by sign (+/–).

In general, the total numbers of migrants in 2019 were more similar to year 2014, compared to the situation in 2009. This was confirmed in the statistical analyses as well; there were more significant differences between years 2009 and 2014 than between 2019 and 2014 (table 4). Even though the totals of most species were rather high, the proportion of juveniles was in most species lower now than in 2014 (tables 2 and 3). There were 13 species with a higher proportion of juveniles in 2014 compared to 2019. Correspondingly, there were only 7 species with a higher proportion of juveniles in 2019 – of those all but one are the non-arctic breeders and only long-tailed duck is true arctic breeder. Note that this is a “meta-result”: only some species had statistically significant differences in their annual proportion of young and some species were not even included in the analyses.

There have been concerns about the future of several species of ducks. Some of them are redlisted globally and a few more are declining. The good news is that the long-tailed duck, after a population crash in late nineties and early 2000, has recovered a bit in the light of our data. This reversed trend is confirmed also elsewhere. However the population is still far from its historic numbers and can still be considered as depleted.

The common scoter (Melanitta nigra) still shows increasing numbers. Paradoxically the proportion of juveniles counted at Cape Põõsaspea has always been very low (less than 2 %). It seems that this is not a bias specific for the site, because there is no indication of high juvenile numbers anywhere else. The sex ratio ♂ : ♀ of the adult common scoter was 75:25 for males in 2019. This is very similar to the sex ratio reported for the wintering population in Southern Baltic during the last few years.

The common eider (Somateria mollissima) is the only abundant duck with a decrease between all four autumns since 2004, suggesting a decrease as much as 90 % during 15 years. Common eiders occurring in Cape Põõsaspea are from the regional population in Gulf of Finland. The proportion of adult males of all birds was 89 % indicating a strongly biased sex ratio and a bad state of the population. The heavy bias towards males is well-known in the Finnish population.

The red-breasted merganser (Mergus serrator) is one of the very few duck species with apparently good breeding success in 2009, 2014 and 2019 (table 3). This may be the reason for the obviously increasing population numbers (table 1).

The autumn 2019 had the lowest numbers of waders during all four autumns covered with the Cape Põõsaspea bird counts. Compared to the wader population sizes, the observed numbers are low in Cape Põõsaspea and conclusions are risky to draw. However, even though the sample size of the observed declining red-necked phalarope (Phalaropus lobatus) abundance is very small, the suggested relatively massive decline is in concordance with reported trends from the declining source population in Fennoscandia.
Cape Põõsaspea is not the top place for pelagic seabirds like the black tern (Chlidonias nigra), Arctic tern (Sterna paradisaea), kittiwake (Rissa tridactyla) and Arctic skua (Stercorarius parasiticus). However the numbers of this ecological group is decreasing season after season and is in accordance with general global decline of seabirds. Little gull (Hydrocoloeus minutus), belonging to this group too, showed a bit larger numbers than in 2014 thanks to obviously better breeding success (tables 2 and 4), but the overall population size still seems being depleted.

Further information on the field work is given at the web site www.eoy.ee/poosaspea/home