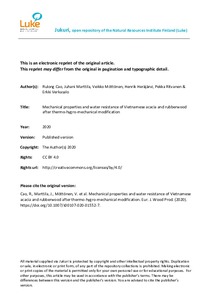 Low density and poor mechanical performance often limit utilisation of sawn wood from fast-growing plantation forests. Thermo-hygro-mechanical modification (THM) of timber is one innovation for improving the properties of light-weight wood species. The objective of this study was to determine the effects of THM and subsequent thermal treatment on dry density, modulus of elasticity (MOE), compression strength, Brinell hardness, and swelling behaviour in immersion tests on two fast-growing Vietnamese species, acacia (Acacia mangium) and rubberwood (Hevea brasiliensis). Test boards were modified in an industrial kiln, in which a tangential thickness compression of 14% and 12% were aimed for acacia and rubberwood, respectively, either with or without subsequent thermal treatment at 210 °C. Dry density, MOE, Brinell hardness, compression strength, and dimensional changes in water immersion tests of specimens were measured from the modified and unmodified reference materials, the latter ones being kiln dried at 50 °C. The results showed that the responses of the mechanical properties were more evident for rubberwood than for acacia. In rubberwood, the MOE and compression strength of wood thermo-hygro-mechanically modified with or without thermal treatment were higher than those of kiln-dried reference specimens throughout the thickness profile. In case of acacia, similar differences between the modified and reference specimens were observed only in the surface layer. Density and Brinell hardness of thermo-hygro-mechanically modified rubberwood were higher than those of reference specimens, but after thermal treatment they did not differ from (acacia) or were lower (rubberwood) than those of THM specimens. Post-compression thermal treatment increased the hydrophobicity of THM specimens.