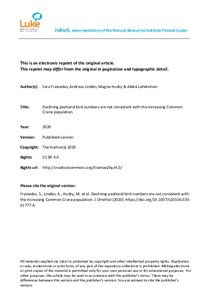 The Common Crane (Grus grus) population has experienced an unprecedented increase across Europe during the last decades. Although cranes feed mostly on invertebrates, amphibians and berries during the breeding season, they can also eat eggs and young of other birds. Therefore, conservationists have raised concerns about the potential predatory effect of cranes on wetland avifauna, but the effects of crane predation on bird numbers have so far not been investigated. We here test the relationship between the crane and peatland bird population’ abundances in Finland for five common wader and passerine species, and a set of seven less common waders, using line-transect data spanning from 1987 to 2014. We found that the population densities of two small passerines (Meadow Pipit Anthus pratensis and Western Yellow Wagtail Motacilla flava) and one wader species (Wood Sandpiper Tringa glareola) were positively associated with crane numbers, probably related to a protective effect against nest predators. For the two other common species and the set of less common waders, we did not find any significant relationships with crane abundance. None of the species was influenced by the (lagged) effect of crane presence (i.e. years since crane was first observed). Peatland drainage was responsible for most species’ negative densities, indicating the need to protect and restore peatlands to mitigate the loss of peatland bird diversity in Finland. In addition, openness, wetness and area size were important peatland characteristics positively influencing most of the studied bird populations. The development in crane and other mire bird numbers in Europe should be monitored regularly to reveal any possible future predatory effects contributing to the shaping of the peatland bird community.