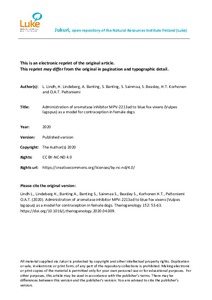 The interest in non-surgical approaches to contraception and fertility control in female dogs has increased in recent years. In this study the effect of an aromatase inhibitor (finrozole) was evaluated in fur production animals, farmed blue fox vixens, as a model for contraception in bitches. A total of 80 vixens were divided into 4 groups, receiving orally placebo (A) or finrozole 0.5 mg/kg (B), 3.5 mg/kg (C) or 24.5 mg/kg (D) for 21 consecutive days beginning in the pre-ovulatory period of heat. Monitoring of the vixens included clinical signs of heat, measurement of vaginal electrical resistance (VER) as well as oestradiol and progesterone concentrations in plasma. The approximate relation of the start of treatment to ovulation varied from 11 days before to one day after ovulation provided that the LH peak occurred 0.5–2 days before the VER peak and ovulation was then estimated to occur 2 days after the LH peak. Seventy vixens were artificially inseminated within 8 h after a 50 Ω decline in vaginal electrical resistance was detected. Ten vixens were not inseminated. Pregnancy was confirmed by transabdominal ultrasound examination and birth of cubs was recorded. The pregnancy rates in the groups were 89.5% (A), 81.3% (B), 55.6% (C) and 52.9% (D). The average number of live born pups in the four groups was 9.4 (A), 7.0 (B), 5.8 (C), and 3.8 (D), respectively. No deleterious effects (for instance malformations) of finrozole on pups could be verified. The administration of finrozole did not have a significant effect on oestradiol parameters and VER values in vixens. Progesterone values were significantly higher in treatment groups compared with the placebo group. The results indicate that pregnancy could be avoided by finrozole provided that doses of ≥3.5 mg/kg were used and the treatment was initiated at least four days before the day of artificial insemination. This corresponds with two to six days before ovulation provided that the LH peak occurred 0.5–2 days before the VER peak and that ovulation then occurred in average 2 days after the LH peak.