Population genetics of the wolverine in Finland: the road to recovery? 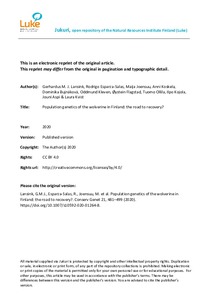 After decades, even centuries of persecution, large carnivore populations are widely recovering in Europe. Considering the recent recovery of the wolverine (Gulo gulo) in Finland, our aim was to evaluate genetic variation using 14 microsatellites and mtDNA control region (579 bp) in order (1) to determine whether the species is represented by a single genetic population within Finland, (2) to quantify the genetic diversity, and (3) to estimate the effective population size. We found two major genetic clusters divided between eastern and northern Finland based on microsatellites (FST = 0.100) but also a significant pattern of isolation by distance. Wolverines in western Finland had a genetic signature similar to the northern cluster, which can be explained by former translocations of wolverines from northern to western Finland. For both main clusters, most estimates of the effective population size Ne were below 50. Nevertheless, the genetic diversity was higher in the eastern cluster (HE = 0.57, AR = 4.0, AP = 0.3) than in the northern cluster (HE = 0.49, AR = 3.7, AP = 0.1). Migration between the clusters was low. Two mtDNA haplotypes were found: one common and identical to Scandinavian wolverines; the other rare and not previously detected. The rare haplotype was more prominent in the eastern genetic cluster. Combining all available data, we infer that the genetic population structure within Finland is shaped by a recent bottleneck, isolation by distance, human-aided translocations and postglacial recolonization routes.