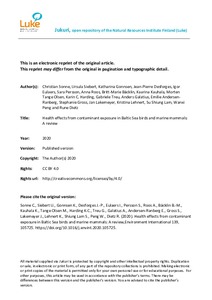 Here we review contaminant exposure and related health effects in six selected Baltic key species. Sentinel
species included are common eider, white-tailed eagle, harbour porpoise, harbour seal, ringed seal and grey seal.
The review represents the first attempt of summarizing available information and baseline data for these biomonitoring
key species exposed to industrial hazardous substances focusing on anthropogenic persistent organic
pollutants (POPs). There was only limited information available for white-tailed eagles and common eider while
extensive information exist on POP exposure and health effects in the four marine mammal species. Here we
report organ-tissue endpoints (pathologies) and multiple biomarkers used to evaluate health and exposure of key
species to POPs, respectively, over the past several decades during which episodes of significant population
declines have been reported. Our review shows that POP exposure affects the reproductive system and survival
through immune suppression and endocrine disruption, which have led to population-level effects on seals and
white-tailed eagles in the Baltic. It is notable that many legacy contaminants, which have been banned for
decades, still appear to affect Baltic wildlife. With respect to common eiders, changes in food composition, quality and contaminant exposure seem to have population effects which need to be investigated further,
especially during the incubation period where the birds fast. Since new industrial contaminants continuously
leak into the environment, we recommend continued monitoring of them in sentinel species in the Baltic,
identifying possible effects linked to climate change, and modelling of population level effects of contaminants
and climate change.