Biodiversity in intensive and extensive grasslands in Finland: the impacts of spatial and temporal changes of agricultural land use 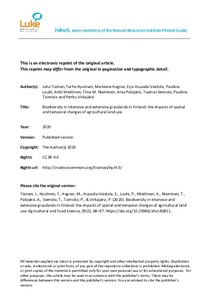 Biodiversity degradation is a national and global problem which is interconnected with land use and climate change. All these are major unsolved questions and their interactions are only partly understood. Agriculture and especially cattle farming is under keen societal focus because of its significant role in soil carbon losses, greenhouse gas (GHG) emissions and biodiversity preservation. We reviewed the Finnish scientific literature to assess the impact of intensive contra extensive grass production on biodiversity using vascular plants, vertebrates, invertebrates and soil biota. Still a few decades ago, mixed farming was prevailing almost everywhere in Finland, but nowadays cereal production is essentially clustered in the southwest and milk and beef production in the northeast. This is reflected in the distribution of intensive (connected with cattle) and extensive grasslands (both types of farming). The bird community was most abundant and species rich in farmland which provides small fields in large blocks of farmland and many kinds of crops, including both intensive and extensive grasslands. Overall permanent grasslands with rather simply vegetation diversity can maintain a diverse community of spiders and leafhoppers, and act as overwintering habitat for polyphagous predators in field ecosystems. The ecological requirement of all species and species groups are probably never met at one site and consequently target should be in having differently managed areas at regional scale. For some of the taxa, ecosystem services could be indicated, but a research-based quantitative assessment is available only for carbon sequestration and weak impact of dung-beetles in diminishing GHG emissions from cow pats. Our review demonstrated that quite much is known about biodiversity in extensively managed grasslands, but very little in intensively managed grasslands. An important question is whether there is some threshold for the proportion of grasslands under which regional biodiversity will be reduced. Intensive production offers limited value to replace the high biodiversity value of semi-natural pastures.