Are there environmental or agricultural benefits in using forest residue biochar in boreal agricultural clay soil? 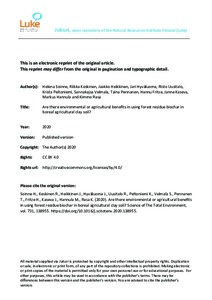 Julkaisusarja
Science of the total environment

Short-term agronomic and environmental benefits are fundamental factors in encouraging farmers to use biochar on a broad scale. The short-term impacts of forest residue biochar (BC) on the productivity and carbon (C) storage of arable boreal clay soil were studied in a field experiment. In addition, rain simulations and aggregate stability tests were carried out to investigate the potential of BC to reduce nutrient export to surface waters. A BC addition of 30 t ha−1 increased soil test phosphorus and decreased bulk density in the surface soil but did not significantly change pH or water retention properties, and most importantly, did not increase the yield. There were no changes in the bacterial or fungal communities, or biomasses. Soil basal respiration was higher in BC-amended plots in the spring, but no differences in respiration rates were detected in the fall two years after the application. Rain simulation experiments did not support the use of BC in reducing erosion or the export of nutrients from the field. Of the C added, on average 80% was discovered in the 0–45 cm soil layer one year after the application. Amendment of boreal clay soil with a high rate of BC characterized by a moderately alkaline pH, low surface functionalities, and a recalcitrant nature, did not induce such positive impacts that would unambiguously motivate farmers to invest in BC. BC use seems unviable from the farmer's perspective but could play a role in climate change mitigation, as it will likely serve as long-term C storage.