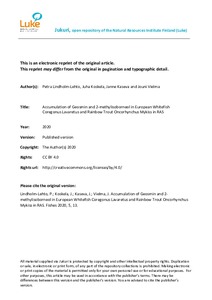 Geosmin (GSM) and 2-methylisoborneol (MIB)-induced off-flavors can cause serious problems in a recirculating aquaculture system (RAS), such as delayed harvest and increased production costs, but also damage producers’ reputation. Traditionally, off-flavors have been removed by depuration before harvesting. Rainbow trout (Oncorhynchus mykiss) and European whitefish (Coregonus lavaretus) are commercially valuable species produced for consumers, both being suitable for rearing in RAS. In this study, European whitefish and rainbow trout were raised
from juvenile up to 240 g (European whitefish) and 660 g (rainbow trout) to monitor the long-term accumulation of off-flavors. The concentrations in fillet of rainbow trout reached 3.6 ng·g-1 (MIB) and 5.6 ng∙g-1 (GSM) with lipid content of 22.5%, while for European whitefish up to 3.2 ng·g-1 (MIB) and 3.9 ng·g-1 (GSM) were found with 14.8% in lipid content. Concentrations up to 58 ng·L-1 (MIB) and 49 ng·L-1 (GSM) were found in the circulating water. Based on the results, the accumulation of MIB proceeds at similar pace for both species. In the case of GSM, the accumulation started similarly for both species but proceeded more quickly for rainbow trout after 140 days of the experiment, with a statistically significant difference (p < 0.05).