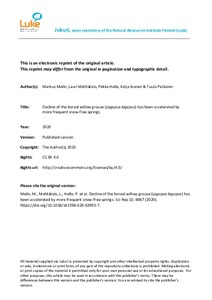 Climate change has influenced a range of species across the globe. Yet, to state a noted decline in the abundance of a given species as a consequence of a specific environmental change, for instance, spatially explicit long-term data are a prerequisite.
This study assessed the extent to which prolonged snow-free periods in autumn and spring have contributed to the decline of the willow grouse, the only forest grouse changing into a white winter plumage. Time-series data of willow grouse numbers from summer surveys across the study area were integrated with local data on weather (snow cover), mammalian predator abundance and hunting intensity. Modelling was conducted with a hierarchical Bayesian Poisson model, acknowledging year-, area- and location-specific variability.
The results show that while willow grouse numbers had decreased continuously across the study landscapes, the decrease was accelerated at the sites where, and during the years when the preceding April was the most snow-free. This indicates a mismatch between the change into a white winter plumage and the presence of snow, turning the bird into an ill-camouflaged prey. The results thus also confirm past hypotheses where local declines of the species have been attributed to prolonged snow-free periods.
Across our study area, autumns and springs have become more snow-free, and the trend has been predicted to continue. Thus, in addition to conservation actions, the future of a species such as the willow grouse is also dependent on its ability to adapt to the changed environmental conditions.