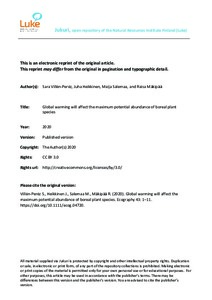 Forecasting the impact of future global warming on biodiversity requires understanding how temperature limits the distribution of species. Here we rely on Liebig's Law of Minimum to estimate the effect of temperature on the maximum potential abundance that a species can attain at a certain location. We develop 95%‐quantile regressions to model the influence of effective temperature sum on the maximum potential abundance of 25 common understory plant species of Finland, along 868 nationwide plots sampled in 1985. Fifteen of these species showed a significant response to temperature sum that was consistent in temperature‐only models and in all‐predictors models, which also included cumulative precipitation, soil texture, soil fertility, tree species and stand maturity as predictors. For species with significant and consistent responses to temperature, we forecasted potential shifts in abundance for the period 2041–2070 under the IPCC A1B emission scenario using temperature‐only models. We predict major potential changes in abundance and average northward distribution shifts of 6–8 km yr−1. Our results emphasize inter‐specific differences in the impact of global warming on the understory layer of boreal forests. Species in all functional groups from dwarf shrubs, herbs and grasses to bryophytes and lichens showed significant responses to temperature, while temperature did not limit the abundance of 10 species. We discuss the interest of modelling the ‘maximum potential abundance’ to deal with the uncertainty in the predictions of realized abundances associated to the effect of environmental factors not accounted for and to dispersal limitations of species, among others. We believe this concept has a promising and unexplored potential to forecast the impact of specific drivers of global change under future scenarios.