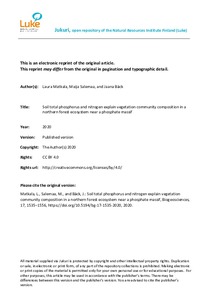 The relationship of the community composition of forest vegetation and soil nutrients were studied near the Sokli phosphate ore deposit in northern Finland. Simultaneously, the effects of the dominant species and the age of trees, rock parent material and soil layer on these nutrients were examined. For this purpose, 16 study plots were established at different distances from the phosphate ore along four transects. Phosphate mining may take place in Sokli in the future, and the vegetation surveys and soil sampling conducted at the plots can be used as a baseline status for following the possible changes that the mining may cause in the surrounding ecosystem. The total phosphorus (P) and nitrogen (N) contents of the soil humus layer were positively related with species number and abundance of the understorey vegetation, and the correlation was slightly higher with P than N. This is interesting, as N usually has the most important growth-limiting role in boreal ecosystems. The spatial variation in the content of soil elements was high both between and within plots, emphasizing the heterogeneity of the soil. Dominant tree species and the soil layer were the most important environmental variables affecting soil nutrient content. High contents of P in the humus layer (maximum 2.60 g kg−1) were measured from the birch-dominated plots. As the P contents of birch leaves and leaf litter were also rather high (2.58 and 1.28 g kg−1, respectively), this may imply that the leaf litter of birch forms an important source of P for the soil. The possible mining effects, together with climate change, can have an influence on the release of nutrients to plants, which may lead to alterations in the vegetation community composition in the study region.