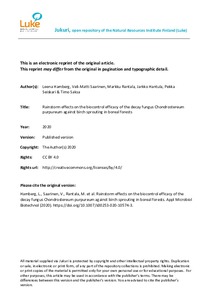 In forest regeneration areas, alongside roads and railways, under electric power lines and above gas pipe lines, there is a need for regular sprout control. A biocontrol method against broadleaved sprouting with formulations including the decay fungus Chondrostereum purpureum (Pers. Ex Fr.) Pouzar has been shown to be effective. Yet, heavy rain during spreading of this fungal inoculum on freshly cut stumps may affect the efficacy of the treatment, i.e., stump mortality during the following years. Thus, we performed an experiment where freshly cut birch stump surfaces (Betula pendula Roth and Betula pubescens Ehrh.) were treated with fungal inoculum under heavy irrigation and without it. Furthermore, two different adjuvants which aimed to fix the fungal inoculum to freshly cut stumps during irrigation and to protect against solar radiation were tested. Our results revealed that the artificial rainstorm treatment caused a delay in the efficacy of C. purpureum, but after three growing seasons, there was no significant difference in the mortality of birch stumps treated under irrigation or without it (stump mortalities 74 and 86%, respectively). Adjuvants did not improve the efficacy in stumps treated under irrigation nor in those treated without irrigation.