Data collection systems and methodologies for the inland fisheries of Europe 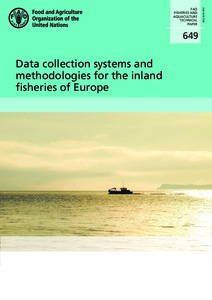 FAO
All rights reserved. This publication is copyrighted. You may download, display and print it for Your own personal use. Commercial use is prohibited.
doi:10.4060/ca7993en
Näytä kaikki kuvailutiedot
Julkaisun pysyvä osoite on
http://urn.fi/URN:NBN:fi-fe202003319888

This document is a technical paper contributing to the regional results under an FAO Technical Cooperation Programme project (TCP/RER/3701) on “Systems and methodologies of data collection in inland fisheries of Europe”, financed by the FAO Regional Office for Europe and Central Asia (REU). This work is facilitated by the European Inland Fisheries and Aquaculture Advisory Commission (EIFAAC), a pan-European network of research institutions, and through a Letter of Agreement between FAO and the Natural Resources Institute Finland (LUKE).

Inland fisheries are important sources of ecosystem services contributing to human diet,
health, well-being and economies. The evaluation of the importance and value of inland
fisheries is one of the biggest challenges for its development. To develop the inland
fisheries data collection, we reviewed the current status of data collection in European
countries and provided five detailed country examples.
The level and methods of inland fisheries data collection in Europe were highly
variable. Some countries did not collect any data on recreational fishing, or it was
collected only from specific areas, or only the number of licenses sold was recorded.
Data collection from catches of diadromous species was most common and harmonized
among countries and in particular, Atlantic salmon Salmo salar were recorded. When
data from other fish species were also nationally collected, the methods used included
postal or telephone recall surveys using a sample of citizens of the country. More
detailed surveys were used to assist national surveys, or were used independently,
in specific sites of importance using various methods, like postal surveys targeted to
fishing license holders, online reporting of catches, or catch reports and logbooks. Many
countries provided fishing license buyers with catch return forms or logbooks to be
filled at fishing occasions and/or returned in the end of the fishing season.
Commercial inland fisheries did not exist, or were very limited, in many European
countries. In countries where commercial fishing was important, in most cases the fishers
were registered and obliged to report their catches. The reliability of self-reporting of
commercial catches was questioned in some cases. There was a trend towards webbased online reporting of inland fisheries data, which some countries were already using.
The specific country examples give detailed description of data collection, focusing on:
1) country-wide postal survey (Finland) and 2) web-based survey and development of
citizen science approach (Denmark). Example 3) from Ireland focuses on recreational
salmonid fishing and conservation limits. There are two examples based on logbook
returns: 4) one strict system, which is considered to work well (Czech Republic) and
5) one less controlled system, currently not producing reliable results, and under
development (Croatia). Case studies were provided in each country example.
Finally, the authors discuss the important aspects of inland fisheries data collection
and review the methods to provide recommendations.