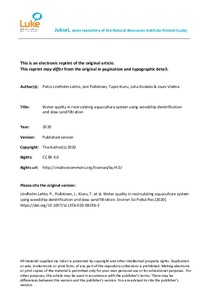 In recirculating aquaculture system (RAS), ammonium excreted by the fish is typically transformed to less toxic nitrate by microbial activity in bioreactors. However, nitrate-nitrogen load can be harmful for the receiving water body when released from the RAS facility. A new type of water treatment system for a RAS was designed, including a passive woodchip denitrification followed by a sand filtration introduced into a side-loop of an experimental RAS, rearing rainbow trout (Oncorhynchus mykiss). In the process, woodchips acted as a carbon source for the denitrification, aiming at a simultaneous nitrogen removal and reduction of water consumption while sand filtration was used to remove organic matter and recondition the circulating water. A variety of chemical analyses and toxicological tests were performed to study the suitability of the process and to ensure the absence of harmful or toxic substances in the system. The results did not show increased toxicity, and no increased mortality was reported for the raised species. After the start-up of the system, the concentrations of fatty acids (e.g., hexadecanoic acid