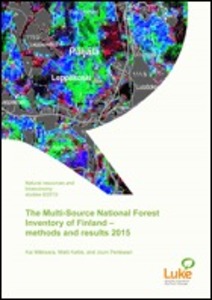 This report presents the methods and results of the Finnish multi-source forest inventory corresponding to year 2015. In addition to field data, satellite images, digital map data and other georeferenced data were used. The main purpose of the article is to make multi-source forest inventory results available for the users and to help the users to understand the principles of the methods and advantages and limitations of the products. The field data originate from the 11th and 12th Finnish National Forest Inventory from years 2012 to 2016. The field data have been computationally updated to the date 31 July, 2015. The satellite images where from years 2015 and 2016 (one frame). The basic features of the improved k-NN, ik-NN, estimation method are described. A new image window based calibration step has been added to processing of some themes.
The results are presented by region (maakunta) and within the regions by municipality, the boundaries as on 1.1.2016. The estimates are given, for example, for land areas, areas of tree species dominance, age, and development classes of stands and often separately for forests available for wood supply. The mean volume and total volume estimates are given in many different ways: by tree species and by timber assortments for forest land, and combined forest land and poorly productive forest land and also for forests available for wood supply, as well as by age and development classes. The biomass estimates are given, in addition to the total biomass estimates, by tree species groups in young thinning stands in which the first commercial thinning was proposed for the first 5-year period, separately for stem and bark and branches and foliage. The biomass estimates of mature forests are presented separately for branches, foliage and stem residuals, and stumps and large roots by tree species groups. These biomass estimates are given separately for land available for wood supply.
In addition to the tabular results, numerical forest resource maps have been computed for 44 themes. The themes include the same variables than in the tables, but the estimation unit is a pixel. Estimates for arbitrary larger units can be computed from the raster maps. Some of the differences between the tabulated results and similar results computed from the maps are discussed in the report.