Evaluation of the Gulf sampling method : Report conducted in the VELMU Inventory Programme for the Underwater Marine Environment 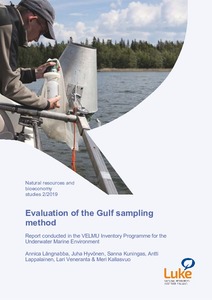 Along the Finnish coast, the Gulf Olympia paired ichthyoplankton samplers have been widely used for collecting early life stages of pelagic fish, e.g. within the Finnish Inventory Programme for Marine Underwater Environment (VELMU), aiming to localize larval habitats. The aim of this study was to examine how prevailing conditions during the sampling period impact the sampling efficiency and the data obtained with the Gulf Olympia samplers.

The study was conducted in the Skinnarfjärden-Köklotfjärden Bay on the west coast of Finland, within the northern Kvarken Archipelago in the northern Baltic Sea. Sampling was carried out along 10 randomly pre-allocated transects during 5 days between the 6th and 12th of June 2017. Effect of sampling depth (0.5 m and 1.0 m), wave height, light availability and sampling time (morning / afternoon) on larval density of perch (Perca fluviatilis) and smelt (Osmerus eperlanus) was studied using linear mixed model analysis.

Sampling depth affected the results, as sampling at 0.5 m yielded 6 times more perch and 1.3 times more smelt larvae than at 1.0 m depth. Wave height was also found to correlate positively with larval abundance of both perch and smelt at depth of 0.5 m, with a 16-fold and 8-fold increase in perch and smelt density respectively, following a change in wave height from 0 m to 0.3 m. Both perch and smelt larval density correlated positively with increasing levels of light, while no significant effect of sampling time was found. Finally, we give recommendations for future sampling settings.