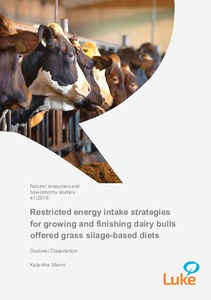 Beef production in Finland is mostly based on dairy breeds. To compensate for the lack of domestic beef, slaughterhouse pricing favours lean and heavy carcasses. Higher carcass weights increase the probability of increasing fatness. It is necessary to control fatness because consumers generally favour low-fat products. In addition, excessive fat accumulation decreases the efficiency of feed utilization. High-fat carcasses are undesirable for the meat industry because the value of fat is low compared with that of red meat. Consequently, slaughterhouses have implemented price penalties for fat carcasses. For these reasons, carcass fat score is an important production parameter that affects the profitability of farms and the entire beef chain. On the other hand, very low-fat carcasses may decrease the eating quality of the meat. Thus, the target is to produce heavy low-fat carcasses without impairing eating quality of the meat. There is need to establish beef production methods to satisfy demand for such carcasses. One way to reduce carcass fatness and improve feed conversion could be to utilize steadily or periodically restricted energy intake and the ability of animals to exhibit compensatory growth.

The main objective of this thesis was to elucidate the effects of different restricted energy intake strategies on performance of growing dairy bulls, especially growth rate, feed efficiency, carcass fatness and meat quality. Energy intake was restricted by restricting concentrate or total diet dry matter (DM) intake (DMI), either periodically or during the whole growing period. The target was to achieve steady, increased or decreased growth patterns with diets based on grass silage and barley grain.

The objective of the second experiment was to determine the effects on animal performance when growth rate was manipulated by controlling energy intake through changing total diet DMI. The treatments consisted of four feed allocation regimes: steady, restricted, increased and decreased energy intake. Restricted energy feeding was conducted by restricting DMI by 20% of the intake in the steady feeding treatment. In the increased and decreased treatments, the DMI was restricted similarly but either during the early or late part of the growing period. Average barley proportion of DMI was 0.42 and when DMI was not restricted, silage was offered ad libitum. Restricted feeding strategies decreased LWG and increased the number of growing days required to reach the same carcass weight. Compensatory growth was recorded. There were no significant differences in average feed efficiency attributable to the treatments over the total experimental period. Restricted DMI decreased carcass fat score. The results indicated that silage intake ad libitum and when supplemented with concentrate resulted in the most effective beef production but it also increased carcass fat score.

The objective of the third experiment was to determine the effects on animal performance when growth rate was manipulated by controlling energy intake through changing concentrate proportion in total mixed ration. The treatments comprised four feed allocation regimes, which were steady, restricted, increased and decreased energy intake. Barley proportion of DM was 0.30 in the steady feeding treatment. When energy intake was restricted, barley was removed from the diet. When barley was supplemented in the diet during the early or late part of the growing period, its proportion on a DM basis was 0.60 and 0.58, respectively. There was a trend of increased LWG by increasing energy intake. When comparing increased and decreased energy intake, carcass fat score increased and decreased, respectively. Energy intake strategies had no effect on feed efficiency over the whole growing period. Although good quality grass silage as a sole feed could support moderate to high levels of performance of growing cattle, including barley in the diet further improved the performance of the animals.

The results of this thesis confirm that increasing energy intake is a feasible method for increasing growth rate and shortening the growing period of dairy bulls, but it also increases carcass fatness. The responses to periodic energy intake demonstrated the great ability of growing bulls to adapt to different kinds of feeding regime without major effects on performance. However, it may reduce carcass fatness. This provides flexibility in selecting feeding strategies based on feed availability and prices, resulting in potential benefits to the economy of beef production. However, when targeting effective rotation time of beef production, high energy feeding during the entire growing period is required. Different feeding regimes had no major effects on meat quality, but did highlight the challenge of improving beef quality through modifying the diet.