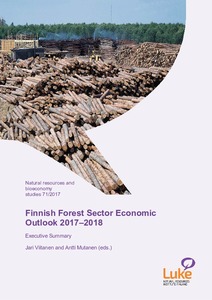 The demand for Finnish forest industry products remains good in the world markets both this year and next year, with the exception of printing and writing papers. The production and export volumes of wood products, pulp, and cardboard increase, whereas the average unit prices of exports remain mainly close to the last year’s levels. Only the export price of pulp is expected to rise more rigorously this year.

In 2018, development will be rather similar to this year, although the growth in the production and export volumes of Finnish forest industry is forecast to slow down slightly from this year. The revenues from paper exports continue to decline, but the decline is counterbalanced by the export earnings from sawnwood, plywood, cardboard and pulp. The sharp growth in pulp production and export volumes are attributable to the full implementation of new production capacity in Finland in the coming year. The exports prices of forest industry products are not expected to change significantly.

In wood products industry, the production and exports volumes of sawnwood and plywood will grow from last year. The Finnish sawnwood exports will be record high again this year, and the exports will continue to grow next year as well. This year, China will become the main target country for Finnish sawnwood exports, both in terms of volume and value. In addition to spruce sawnwood, the exports of pine sawnwood are growing to China, to which pine sawnwood flows have been directed from the troubled North African market. Although the decline in the export price of pine sawnwood is expected to gradually fade, the difference between the export prices of pine and spruce sawnwood will remain substantial this year, which is reflected negatively in the profitability of pine sawnwood production. In 2018, the production and exports of plywood will grow from the current year, which is due to the continued growth in construction in Europe and investments especially in LVL production in Finland.

Although paper account for more than one third of the export earnings of the Finnish forest industry, the declining trend in paper production and export volumes will continue this year and next year. This is mainly attributable to the falling demand for printing and writing paper in the world markets and reduced production capacity in Finland. Instead, the demand for other paper assortments is growing in packaging as well as in hygiene and household use. The positive drive of the global economy and trade increases the need for packaging, which enhances the demand for cardboard. The growth in production capacity in Finland enables the expansion of cardboard production and exports both this year and next year. Despite the increase in demand, the export price of cardboard will rise only slightly. The introduction of new capacity and the conversions of paper machines into cardboard production will inflate supply in Europe and create pressure on the market prices.

With the new capacity, the production and exports of pulp will grow this year and next year. Growth will be more pronounced in 2018, when the new investments will be in full production. The importance of China as export destination for Finnish pulp is growing year-on-year and China’s share of pulp exports is already one third. The unit price of Finnish pulp exports fluctuates strongly along with world market prices, and according to price development in the first half of this year, the export price of pulp is to rise this year after a fair drop experienced last year. Next year, the export price of pulp is expected to fall slightly as softwood and hardwood pulp production is expanding worldwide. As the prices of the main raw materials are expected to develop moderately, the profitability of the pulp and paper industry is expected to remain at a good level both this year and next year.

The growth in the production and export volumes of the forest industry products will increase the commercial fellings to 63.6 million cubic metres this year and to 65.0 million cubic metres next year. The growth in the use of roundwood in Finland is mainly satisfied by expanding the use of domestic wood. Roundwood imports are expected to decrease below 9 million cubic meters this year but to grow again next year. Due to the healthy demand for spruce sawnwood, the stumpage price of spruce sawlogs will rise most strongly this year. The increasing use of spruce and pine pulpwood in cardboard and pulp production will raise their stumpage prices this year. No major changes in stumpage prices are expected to occur next year.

In non-industrial private forestry, the gross stumpage earnings rose to EUR 1.8 billion last year and they are is estimated to grow to EUR 1.9 billion this year, thanks to the increasing fellings and rising stumpage prices. Also next year, the stumpage earnings are expected to rise. In non-industrial private forestry, the operating profit per hectare is EUR 126 in 2017 and EUR 129 in 2018.

The use of forest energy is still far short of laid goals. The cheap emission allowances, the low world market price of coal, and the uncertainty related EU policies that may affect the profitability of forest biomass in energy use will shift investment decisions to the future and hamper the greater growth in forest energy. On an annual level, weather conditions also have a strong influence on the use of forest energy. In 2017, the use of forest chips is estimated to grow by two per cent, and next year, the use is expected to increase further to 8.5 million cubic meters. This year, the average purchase price of forest chips at plant will remain at last year's level and next year the price will rise only slightly. The production of wood pellets in Finland will recover this year after the sharp decline in production volumes last year.

Although production volumes in both the wood products and pulp and paper industries are projected to increase this year and next year, the number of employees in the forest industry will decrease according to the statistics on the beginning of this year. Although there are sectoral differences, automation and general growth in productivity will reduce the need for labour, and employment in the forest industry will decline by a couple of per cent this year. In forestry and despite the growth in commercial fellings, the employment is also expected to decline this year. The introduction of e-commerce in wood trade, the overcapacity in harvesting, and the use of foreign labour in forest management will decrease the demand for domestic labour. In 2017, employment in forestry is estimated to fall to 21,000. Next year, both in the forest industry and in the forestry, the number of employees will remain at this year's level.