Ritual deposition of animals in late Iron age Finland: a case-study of the Mulli settlement site in Raisio 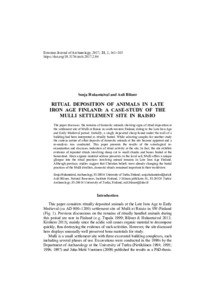 Estonian Academy of Sciences
by-nc
http://www.kirj.ee/11374/
The journal applies the Creative Commons Attribution-NonCommercial 4.0 International License CC BY-NC to all articles. This means that all articles will become freely accessible once published.The repositories of universities and other scientific institutions are allowed to redistribute and display the articles for non-commercial purposes.
doi:doi:10.3176/arch.2017.2.04
Näytä kaikki kuvailutiedot
Julkaisun pysyvä osoite on
http://urn.fi/URN:NBN:fi-fe2017101850152

The paper discusses the remains of domestic animals showing signs of ritual deposition at
the settlement site of Mulli at Raisio in south-western Finland, dating to the Late Iron Age
and Early Medieval period. Initially, a singly deposited sheep found under the wall of a
building had been interpreted as ritually buried. While selecting samples for another study
the curious nature of other deposits of domestic animals at the site became apparent and a
re-analysis was conducted. This paper presents the results of the osteological reexamination
and discusses indicators of ritual activity at the site. In fact, the site exhibits
evidence of repeated rituals involving sheep cut to small chunks and bones buried at the
homestead. Since organic material seldom preserves in the local soil, Mulli offers a unique
glimpse into the ritual practices involving animal remains in Late Iron Age Finland.
Although previous studies suggest that Christian beliefs were already changing the burial
practices of the Mulli dwellers, domestic rituals remained important in their worldview.