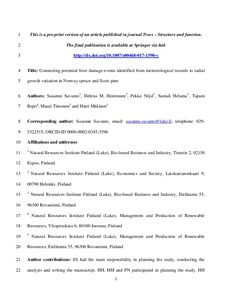 The aim of this study was to examine if temperature conditions potentially causing frost damage have an effect on radial growth in Norway spruce and Scots pine in Finland. We hypothesized that frost damage occurs and reduces radial growth after (1) extreme cold winter temperatures, (2) frost hardiness levels insufficient to minimum temperatures, and (3) the lack of insulating snow cover during freezing temperatures, resulting in increased frost and decreased temperatures in soil. Meteorological records were used to define variables describing the conditions of each hypothesis and a dynamic frost hardiness model was used to find events of insufficient frost hardiness levels. As frost damage is likely to occur only under exceptional conditions, we used generalized extreme value distributions to describe the frost variables. Our results did not show strong connections between radial growth and the frost damage events. However, significant growth reductions were found at some Norway spruce sites after events insufficient frost hardiness levels, and alternatively, after winters with high frost sum of snowless days. Scots pine did not show significant growth reductions associated with any of the studied variables. Thus, radial growth in Norway spruce may be more sensitive to future changes in winter conditions. Our results demonstrate that considering only temperature is unlikely to be sufficient in studying winter temperature effects on tree growth. Instead, understanding the effects of changing temperature and snow conditions in relation to tree physiology and phenology is needed.