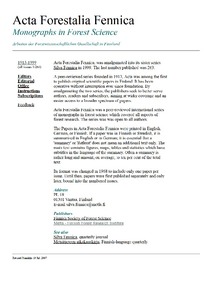 Acta Forestalia Fennica was a peer-reviewed international series of monographs in forest science which covered all aspects of forest research. The series was was open to all authors. The series was founded in 1913, and it was among the first to publish original scientific papers in Finland. Acta Forestalia Fennica, was amalgamated into its sister series Silva Fennica in 1999. The last number published was 263. See the website for DOI identifiers.