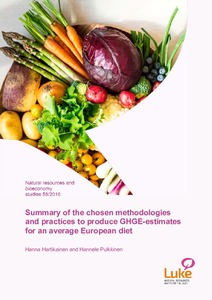 The primary goal of our study was to produce greenhouse gas emission -estimates (GHGE-estimates) for average diets in Europe to be used in SUSDIET-project (Towards Sustainable Diets in Europe, the ERANET SUSFOOD Call 2014–2017). The SUSDIET-project aim was to optimize diets from environ-mental and nutritional point of view and to evaluate impacts of information policies of promoting sustainable diets.