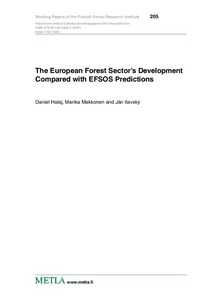 The aim of this study is to compare the predictions of the European forest sector development that were made in the European Forest Sector Outlook Study 1960 2000 2020 (EFSOS) and the real development of different indicators defining the sector s actual state. EFSOS presented several scenarios on the European forest sector. Comparisons were carried out for these scenarios on the following attributes: forests available for wood supply, growing stock, net annual increment, fellings, sawnwood net trade, wood-based panels net trade, paper and paperboard net trade and roundwood price development. In addition, the development of the protected forest area and the forests ownership structure were analysed. Series of data for 2000 2008 were analysed. The starting point for both analyses was 2000, which was the starting point of the EFSOS scenarios.These studies on European forest resources were conducted more than 10 years ago. Substantial structural, organisational and policy changes have since been made not only in the forest sector but also in other sectors related to forestry, such as in agriculture, environment and energy. Changes in countries in Central and Eastern Europe and the former USSR during the transition period and the increased use of forest biomass for energy production are the most important changes. In addition, the global economic crisis in the past few years has severely affected the forest sector in Europe. Most of the data series used in the EFSOS models were collected in the 1990s. Therefore, those changes had some impact on the accuracy of the predictions, especially since 2006, when the first impact of the global financial crisis appeared. The results of this study allow us to conclude that after the recovery of the economy new models and predictions of forest sector development will be needed.