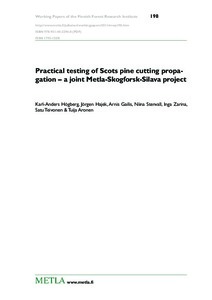 Testing of candidates as clones would greatly benefit breeding of Scots pine (Pinus sylvestris L.),but has not been applied because vegetative propagation is difficult. With a common interest in Scotspine breeding, forest research institutions from Sweden, Finland and Latvia (Skogforsk, Metla and Silava, respectively) joined in a collaborative project to develop pine cutting propagation for breedingpurposes. The main objective of this effort was to find protocols for sufficient shoot production and at the same time maintain a high rooting response. Secondly, the aim was to increase the knowledge onthe influence of different rooting agents, watering regimes and substrates on the rooting of cuttings.Both local and shared materials were used in studies of five propagation methods performed in all participating countries. Separate experiments were performed with rooting environment factors.According to the results, the average production of cuttings with propagation models including two harvests in consecutive years on the same donor plant can be predicted to be 10-15 cuttings/donor plant,with a substantial variation among families and donor plants. Even though rooting responses above 50% can be achieved, this could not be repeated for a large number of propagations. The generally lowand erratic rooting responses leads to the conclusion that the project was unsuccessful in developing improved and reliable protocols for Scots pine cutting propagation. However, a propagation model enabling two harvests on a 1-year-old plant within the same year is a promising option but needs further studies.