Energy sector in Belarus: Focus on wood and peat fuels 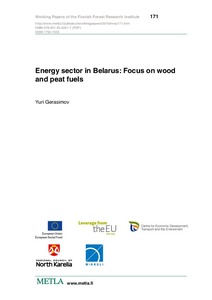 The energy sector in Belarus makes up approximately 30% of the industrial structure of the country. The role of the sector is large both in exports (36% of the total export value) and imports (39% of the total import value). Previously access to cheap gas from Russia and a lack of energy diversification policies have prevented Belarus from developing its potential local energy resources for energy generation. Nowadays energy security, which is determined primarily by the share of local energy resources in the overall energy balance, is the top priority. Currently, the share of local fuels is about 16% of the gross consumption of primary energy and 17% in the use of boiler and furnace fuel. According to the concept of energy security of Belarus the latter figure must be increased to 25% by 2012. Belarus is poorly endowed with fossil resources, which have met only about 7% of the country s primary energy consumption in recent years. The most valuable Belarusian fossil energy resource is high quality oil, but its residual reserves are estimated at only 55 million tons. The total reserves of peat in the country are identified as 4 billion tons, but most of these are in agricultural land, or assigned to environmental areas. The natural conditions of Belarus do not allow a large-scale use of such renewable energy sources as wind, solar and hydro. The greatest potential sources of renewable energy in Belarus are the forests. The annual increment of forests is about 28.6 million m³; which can provide approximately 4.6 million toe (tons of oil equivalent) per year. Therefore, it is wood and peat which will be the main sources of growth in the share of local energy resources in the energy balance of Belarus until 2020. The current annual harvest of woody biomass for energy is about 9 million m³ whereas the share of peat is over 3 million tons. In 2009, Belarus produced 5.6 million m³ of wood in rough, 0.6 million solid m³ of wood chips, 57 000 ton of wood pellets and briquettes, 1.2 million tons peat fuel briquettes. The government has developed a series of regulatory documents to create a legislative, economic, financial, organizational and technical framework in the use of wood and peat fuels (Local Fuels Programme 2004, Woodfuels Programme 2009, Peat Programme 2008, Forestry Programme 2006). The target is 7 million m³ of wood in rough, 1.5 million solid m³ of wood chips, 0.8 million tons of wood pellets and briquettes, and 1.5 million tons of peat fuel briquettes. However, there is a risk that the targeted increase in the production of woodfuels may cause an extensive use of high-quality logs as woodfuel, which will have negative environmental implications and cause a suboptimal exploitation of the forest resources. Many of these issues are not unique to Belarus and are being faced by several countries who plan to promote renewable energy.