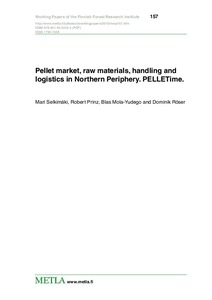 Wood pellets have become an important fuel in heat and power production. The pellet market and supply structures are currently undergoing rapid development. Ensuring the quality of pellets through the whole production, delivery and handling chain is important in order to increase the use of pellets and sustain its ability to compete with other fuels. This study focuses on the development of the pellet market, raw materials and supply structures mainly in Sweden and Finland. Sweden has a highly developed pellet market, where fuel taxation has promoted the use of wood pellets especially in large scale boilers of 2MW, where more than half of the pellets are combusted. There are about 120 000 households using pellet heating systems in addition to the 20 000 households using pellet stoves. Sweden is the world s largest producer and consumer of pellets. In 2007 a total of 94 pellet plants/producers were producing 1.4 million tonnes of pellets, while at the same time the consumption was 1.7 million tonnes. In addition, about 400 000 tonnes of pellets were imported to meet domestic demand. In Finland, pellet production has been growing steadily despite the fact that domestic consumption has remained relatively small until recently. Today there are 24 pellet plants/producers. In 2007 production was around 330 000 tonnes while the domestic consumption was 117 000 tonnes. The pellet market in Finland has long been export oriented; with 75% and 58% of production being exported in 2006 and 2007, respectively. Domestic consumption has been growing mainly in the small scale consumer sector; it is estimated that 15 000 households had pellet heating systems in 2008. Concerning supply structures, Sweden has well established pellet distribution networks, for domestic household consumers pellets are mainly delivered in sacks (80%) directly from the plant or through extensive network of retailers while bulk deliveries are less common (20%). In Finland pellets are delivered to users mainly in bulk (71%) using pneumatic or normal trucks when the share of sack deliveries is much smaller, large sacks (25.5%) and small sacks (3.5%). In the future, the increasing number of pellet users requires an organized delivery network and good equipment for bulk pellet deliveries, currently the equipment used varies significantly