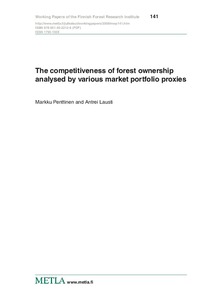 A new market wealth portfolio index for Finland using stocks, bonds, debentures, offices, private housing and non-industrial private forests in 1972 2008 has been constructed for capital asset pricing model (CAPM) analyses.First, normality, autocorrelation, heteroscedasticity, model fitness and functional misspecification were tested. Second, outliers were identified using Cook s distance measure recognising years 1973, 1991 and 1999. Third, possible breaks between 1972 2008 were analysed using the rolling Chow tests, which suggested a break after 1983. Fourth, correlation study demonstrated that forest correlated significantly with private housing and also with stocks delayed by one year. Fifth, a CAPM was studied with evolving market portfolio proxies.With the stocks-only market portfolio proxy, the systematic risk (beta) of forest ownership was 0.12 and the risk-adjusted return per annum (alpha) -0.29, but the explanatory power remained only at 7%. With the market value weighted portfolio proxy including all asset classes, the beta was 0.60, significantly different from zero, and the alpha declined to -2.2, but did not, however, differ significantly from zero. The explanatory power of regression jumped to 44%. Moreover, high betas and low alphas persisted with other proxies such as one entirely without forests (0.50 and -2.0), even without forests and after removing the outlier years 1973, 1991 and 1999 using dummy variables (0.60 and -2.5). The shorter period 1984 2008 suggested a slightly lower alpha -2.9, but with inclusion of the dummy years 1991, 1994 and 1999 even better alpha -2.1. Finally, the prerequisites for applying CAPM and model residuals were systematically analysed.