Russian-Finnish roundwood trade – some empirical evidence on cultural based differences 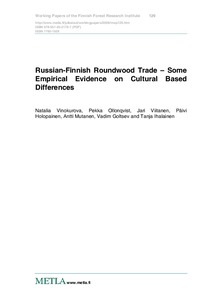 Understanding cultural differences is important and can frequently be decisive for the success in international business operations and gives tools for business planning. The aim of this study was to identify empirically how cross-cultural differences and understanding of time, time horizons and management, distribution of power and managerial responsibilities as well as language barriers and other culture-induced differences induce or impede roundwood trade between Finland and Russia. Sixteen managers in Finland and ten managers in Russia involved in roundwood trade were asked several questions concerning the division of power, hierarchy, and time and quality management in their company or organisation. In Finland, the survey was implemented in autumn 2005 while in Russia the survey was conducted during spring 2007. Thus, the cirmumstances in roundwood trade were not alike.The results indicate that the notions of time, time horizons, how time is managed, distribution of power and responsibilities as well as language barriers and other culture-induced differences were considered of minor importance in the business relations in spite of cultural dissimilarities between Russia and Finland. Personal and unofficial contacts were seen highly important to run daily business in roundwood trade on both sides of the border. The responsibility of decision-making in Russian roundwood organisations was slightly more concentrated on single person than in Finland. Majority of the respondents considered the unexpected changes in Russian official policy as a high risk for long run planning and have larger impacts on trade compared to changes in Finnish policy. In general, the results indicate that Russian roundwood traders have adapted the market and customer orientated way of thinking and are able to consider customers requests.