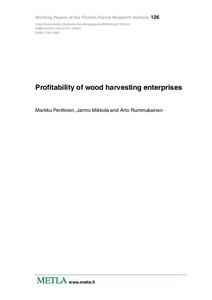 The forest machine business is about 50 years old. The rapid technical development of machinery increased productivity up to the end of last century. In 2007, the total value of round and energy wood harvesting and silvicultural work operated by forest machine enterprises exceeded 570 mill. . According to the materials of the Vehicle Administration Finland and Statistics Finland there are about 1 600 active harvesting enterprises in the personal and business taxation system. Beside this, there are according to the Ministry of Agriculture and Forestry about 1 300 farmers who do harvesting as side business. About 1 000 enterprises working in June 2007 were studied with their retrospective economic analyses from 2001. The data includes all enterprises that had supplied closing of the accounts data. One-machine entrepreneurs represent more than a third of the number of enterprises, but only 13 percent of the turnover. Enterprises with seven or more machines represent less than ten percent of the number, but over twenty percent of the turnover. Enterprises are largest in eastern and northern Finland, where the average number of machines per enterprise exceeds three. Small enterprises are mostly singleowner business enterprises with a median turnover of 125 000 euros per annum. Partnerships and limited enterprises have double the median turnover of single-owner businesss. Limited companies turn over a median of 450 000 /y, representing 67 percent of total turnover.Median net profit varied between 6 and 10 percent of turnover in 2001 2007, but only between 2 and 4 percent where the wage adjustment is deducted from the profit. The wage adjustment is estimated as if the owners of single-owner businesses earn an operator s salary. Profit was highest in 2002 and lowest 2006. In the smallest enterprise class with a turnover of less than 75 000 /y, profit was lowest and negative in 2006 and 2007. The variation in profits between enterprises was also biggest in that period. The median net profit was best in limited companies and partnerships; about 6 percent. The annual reserve after debt amortization and investment was some 50 000 among the biggest enterprises, about 30 000 among the medium size groups and at most some 10 000 in the smallest ones. Return on capital varied only a little, showing a slight decrease towards the end of study period. In 2007, return on assets (ROA) was around 12%, except in enterprises with turnover of less than 75 000 , where ROA was two percent. Return on equity (ROE) varied between 15 and 25%, except for the smallest enterprises, with less than 10%. The harvesting business, with limited means of meeting the severe challenges of global recession, cease operations for several months. Finding a profitable growing formula and qualified operators is a challenge, even without these cuts.