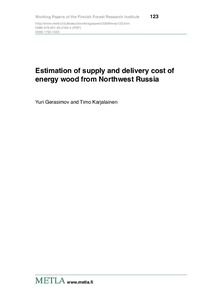 Possibilities for energy-wood supply and delivery costs for the eight regions in Northwest Russia have been assessed. By-products from harvesting and mechanical wood processing were considered as sources for energy production based on actual harvesting, sawmill and plywood production in 2006 and was estimated at 30.7 million m3. Nearly 30.5 million m3 of the energy wood could be transported, and the rest of the energy wood was inaccessible due to lack of road infrastructure in the Republic of Komi and the Arkhangelsk region. About 70% of the energy wood was from harvesting, consisting of non-industrial roundwood, unused branches and tops, defective wood resulting from logging, spruce stumps removed after final felling, and 30% from sawmills and plywood mills, i.e., chips, sawdust and bark. The delivery cost of energy wood to the potential border-crossing points in Finland was analyzed for three means of transport. The delivery cost of energy wood by railway varied from 28.9 to 43.5 m3. Volume was estimated as 27.8 million m3 and maximum distance as 2110 km to the border station. The cheapest means of delivering energy wood was by road. Delivered cost for energy wood by road varied from 15.8 to 18.5 /m3. However, the volume was limited to a 200-km belt along the border between Russia and Finland and was 1.6 million m3. The most expensive means of delivering energy wood was by waterway. Delivery cost for energy wood by waterway varied from 45.0 to 47.9 /m3. The volume was estimated at 0.8 million m3 from a remote area without feasible access to railway in the Lake Onego area. It should be emphasized that we have estimated supply and delivery costs, not prices which are defined by the market based on supply and demand.