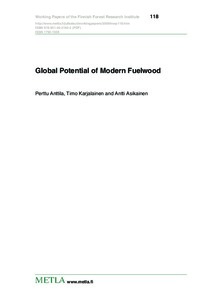 The increasing demand for biomass energy also enhances the need for more accurate estimates of the availability of biomass resources. Estimation of the forest energy potential is neither a trivial nor an unambiguous task because of the varying raw material base, constraints on availability, differences in geographical and temporal scopes, incomplete statistics, erroneous models, and intense assumptions of future development. As a result, current estimates may differ as much as two orders of magnitude. To overcome some of these problems globally consistent statistics and methods were utilised with the aim of obtaining rough estimates of modern fuelwood potentials at the continental or subcontinental levels. These estimates could then be used to direct the marketing of technology and further research to promising regions. Modern fuelwood is wood that is used at an industrial scale and relatively high efficiency compared to traditional fuelwood. The technical potential of the primary forest residues and one quarter of the surplus wood from any positive wood balance were estimated to provide the global fuelwood potential of 5 9 EJ, which represents 1 2% of the global primary energy demand. The most promising regions with respect to modern fuelwood potential are the USA and Canada, Central and Northern Europe, Russia, East Asia, Brazil, and Chile. In South America the potential consists mostly of logging residues from present cuttings, whereas in North America, Europe, and especially in East Asia the contribution of surplus forest growth is considerable. The potential per land area is especially high in many countries in Central and Northern Europe, and Japan.