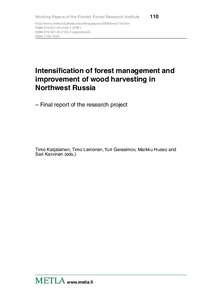 The project aimed to investigate the accessibility of forest resources in Northwest (NW) Russia, the impacts of both Scandinavian and current Russian forest management and wood harvesting on ecologically, socially and economically sustainable forestry, and to enhance the development of sustainable forest management and wood harvesting methods for NW Russia.The research group found both positive trends, but also development needs in forest management in Northwest Russia. Since 1993, the area of lands without forest vegetation needing forest regeneration has decreased to a half. On the other hand, in 1999-2006 almost every fifth hectare of clear felling was left without active forest regeneration measures. Moreover, the extent of intermediate felling has been insufficient being only about fifth of the annual allowable area and 9% of the total timber harvesting volume.Wood harvesting has been rather stable last 10 years in NW Russia, at the level of about 40 million m3 per year. Less than half of the annual allowable cut is utilised and most of the round wood is produced by large and medium sized logging companies. Traditional full-tree and tree-length harvesting methods and systems are still dominating in most of the regions even though use of cut-to-length method is becoming more common. Several factors hamper development of wood harvesting, including for example weak production infrastructure, weak road network, lack of own turnover means in companies, low quality in harvester and forwarder operator trainging, and increasing variable costs.Scenario analysis indicate that mature and over mature forests in NW Russia are able to secure wood supply at the current levels for the next 50 years, but that intensification of forest management would allow to substantially increase annual fellings. The discrepancy between forest resources and their accessibility has been regarded as one main problem of forest management. Good infrastructure is essential for harvesting operations and thus the economic accessibility of forest resources.