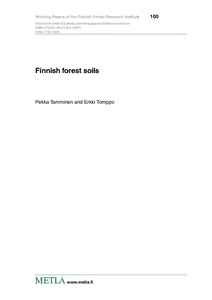 It was possible to classify forest soils according to the World reference base soil classification system (WRB) on the basis of the site and soil variables measured or estimated in the Finnish 9th National Forest Inventory. A small sub-sample was selected from the NFI plots (n = 285) and the soils of these plots were inventoried by the soil survey teams. This second-phase sample was selected to cover the whole range of soil texture, organic layer thickness and site fertility throughout Finland. The soil type on about 67 400 NFI sample plots was predicted and the frequencies of soil types were estimated over the whole country and in the areas of the forestry centres. The most frequent soil types were Podzols (50 %), Histosols (25 %), Arenosols (11 %) and Leptosols (9 %). Finer-textured soils, Cambisols (1.9 %), Gleysols (1.4 %) and Regosols (1.2 %), had only a small proportion.International soil classifications seem to be relatively unsuitable for forest soils in Finland, because the important organic layer is not taken into account at all. Instead of many separate soil classes based on soil formation processes or associated properties, the use of continuous variables would be more useful for primary soil users.