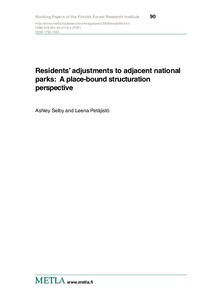 The paper surveys residents adjustments to their local national parks and explores place-bound structuration theory as a way to explain the results. Such an approach was considered to be necessary because the international literature on local community adjustments to national parks is rather contradictory, with each study seeming to elicit different reactions from local residents. Making inferences from the literature is therefore not without risk. The study aims to assist the making of inferences by examining the place-related local community processes that come to play when implementing and managing national parks.The study concerns Linnansaari and Seitseminen National Parks in Southern Finland; the former was created in 1950s the latter in the 1980s. Data was collected in 2007 by mailed questionnaires to household located in postal districts adjacent to the national parks. Most residents considered their local national park to have brought benefits to their locality. Nevertheless, a range of attitudes towards park-based development was found ranging from opposition to unconditional acceptance. These attitudes were conditional upon both personal and communal experiences, often consisting of challenges to established local activities (e.g. forestry) or as perceived opportunities for new activities. The time element, essential to the dialectic process of structuration, was only weakly observed. However, a greater opportunity for new (tourist-based) business was perceived by residents adjacent to the older park. A surprisingly slow place-attachment process in both areas was considered to slow the structuration process. Younger residents and residents with shorter domicile in the localities were more likely to accept park-based development than older residents and residents with longer domicile. Farmers and forest owners were more likely to oppose park-based developments. Local authorities, but less so the park authority (Metsähallitus), were considered to have hindered the integration of the parks into their communities by lack of co-operation (negotiation). While the majority of residents perceived many benefits from the national parks, the study indicated that the introduction of space-demanding projects (national parks) that had no previous (local) institutional role has disturbed the lives of local residents. This gains expression by opposition, or reserved attitudes, to the national parks, as well as a limited response to the opportunities created by the parks.