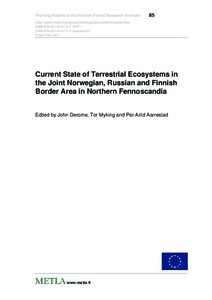 An international EU/Interreg III Kolarctic project "Development and implementation of an environmental monitoring and assessment program in the joint Finnish, Norwegian and Russian border area", was carried out during 2003 2006 as a joint undertaking between Norwegian, Finnish and Russian research institutes and environmental authorities. The aim of the terrestrial ecosystem sub-project of the Pasvik project was to develop and implement a monitoring and assessment programme for terrestrial ecosystems in the joint Finnish, Norwegian and Russian border area. The sub-project was carried out in six stages: 1) evaluation of the sufficiency of existing monitoring activities, 2) harmonization of the monitoring and assessment methods (sampling, measurement and observation, laboratory analyses, data analysis, evaluation and reporting) required for monitoring terrestrial ecosystems, 3) development of methods for assessing new parameters depicting terrestrial ecosystem condition and functioning in the region, 4) testing of the integrated monitoring programme, to be implemented by the environmental authorities and organizations of the three countries, during the period when emissions from the Pechenganikel smelter complex are expected to decrease as a result of renovation of the smelter, 5) assessment of the state of terrestrial ecosystems in the region, and 6) compilation of recommendations for a future joint monitoring programme. According to the results of the project, there are signs of a slight recovery in the condition of terrestrial ecosystems in the area around the emission source, e.g. the reappearance of pioneer species of bryophytes and lichens on a number of the Russian plots, and the marked recolonization of epiphytic lichens on the least polluted plots along the transect running to the west of the smelter. Satellite imagery indicates that there has been an increase in lichen coverage in the area from 1994 to 2004, which is related to the reduction in emissions during the past 10 years. Lichens are sensitive indicators of pollution, especially SO2. Furthermore, there has been an increase in the vitality of birch and bilberry (measured as photosynthetic efficiency) along the transect running to the south of the smelter, as well as a smaller increase along the transect running to the north. In contrast, the accumulation of heavy metals (especially Ni) in mosses has increased during the past 15 years. The continuing emission of heavy metals is clearly reflected in the metal concentrations in mosses up to a distance of ca. 30 km from the smelters. The soil close to the smelter contains extremely high concentrations of a wide range of heavy metals, representing accumulation over the lifetime of the smelters. Elevated heavy metal concentrations also extend up to a distance of 30-40 km from the smelters. Although a relatively high proportion of the metals are in an immobilized form, the concentrations of plant-available metals are still excessively high. Accumulation of metals in the litter and organic layer is reflected in heavy metal concentrations in plants. such as grasses and dwarf shrubs, as well as in the needles and leaves of trees. The soil in the immediate vicinity of the smelter is not suffering from soil acidification, despite the continued relatively high level of SO2 emissions, due to the abundant occurrence of basic types of bedrock in the area.