Facts and figures of the Barents forest sector 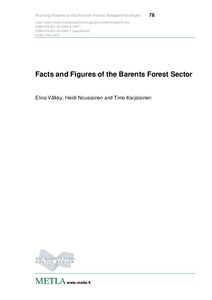 Aim of this paper is to present the key facts and figures of the forest sector of the northernmost parts of Norway, Sweden, Finland and Russia i.e. so called Barents Region. The paper provides an overview on the forestry and forest industry of the regions and discusses the future development of the forest sector in the Barents Region.Forest area of the Barents region is about 87 million hectares, growing stock approximately 8 billion m3, and annual fellings nearly 48 million m3. About 80% of the forest area and growing stock volume are in the Russian part of the Region. Intensity of forest utilisation is much lower in Russian and Norwegian parts of the Region than in Finland and Sweden. Medium-sized and large-scale companies dominate the forest industry of the Barents Region. Some of the largest pulp and paper producers in Europe are located in the northernmost counties of Finland and Sweden. In general, these countries answer for over 60% of the European Union pulp production, one quarter of paper and cardboard production and over 30% of the production of sawn goods. Also Russian part of the Barents Region is a significant producer of forest industry products: the region produces almost half of the produced pulp in Russia, 45% of paper, over one third of all produced cardboard and 17% of sawn timber. As a renewable resource, forests provide a lot of opportunities for the Northern Europe. However, it requires planning, product development and cooperation between the forest sector actors and other stakeholders to utilise forests to their full potential. In addition to high-grade wood-based products, bioenergy is a future possibility of the Northern Europe. Also non-wood uses of forests can be a significant provider of income in the northern areas.