Marketing of forest reproductive material: the use of microsatellites for identification of registered tree clones in Finland 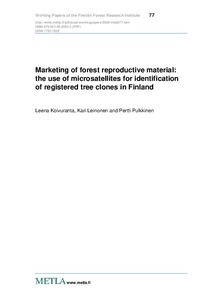 According to the current legislation on the marketing of forest reproductive material, tree clones marketed in the EU must have certain traits which make them identifiable, and these traits must have been accepted and registered by an official body. Due to this obligation, there is a need for reliable, functional and practicable methods for specifying these distinctive characters.We have developed a clone identification method for European and hybrid aspens and curly birch, based on nuclear microsatellites, which can be used for determining the distinctive characters mentioned in the directive. For aspens, we have used 18 loci, of which nine were developed earlier for P. tremuloides and nine for P. nigra. For curly birch (Betula pendula var. carelica), we have used seven loci developed for B. pendula and three loci developed for B. platyphylla var. japonica. Most of the aspen clones were easily identifiable using only part of the loci. In the case of curly birch, however, two clones could not be separated from each other despite the relatively high number and polymorphism of the loci, which suggests that these two clones were actually samples from the same clone. These kinds of mistakes further emphasise the urgent need for a reliable clone identification method.