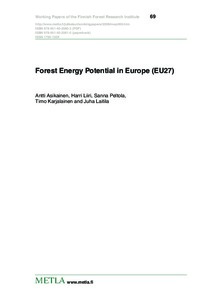 The aim of this study was to estimate forest energy potential in Europe, in particular in 27 European countries that were members of the European Union as of the beginning of 2007. The study is limited to forests available for wood supply. Positive annual change rate of the growing stock illustrates unutilized surplus, which is currently left in the forests. It could be used for industrial purposes for energy production as it is the difference between net annual increment and fellings. Felling residues that are usually left in the forest are becoming an increasingly important source for energy production.Forest resources in Europe have been increasing during the last 50 years. Annual change rate is approximately 238.6 million m³ per year or 35% of the net annual increment. The annual change rate has been clearly positive for several decades, and thus an increasing amount of wood has accumulated in the forests, resulting in them becoming denser with older age class structures. Competition for the wood resources is increasing and obviously fulfilment of the demands for industrial use, energy production and protection would require compromises. The use of roundwood directly for energy purposes would depend on the prices of roundwood, especially that for wood-based panels, pulp and paper as well as for energy production.The potential sources of forest fuels are felling residues and stumps from current fellings and the complementary fellings from the annual change rate surplus, including the roundwood, crown mass and stump wood. It was estimated that felling residues total 211 million m³ annually. Annually harvestable residues were estimated to be 76.5 million m³. Annually harvestable stump wood was estimated to be 7.4 million m³. The total amount of annually harvestable residues and stumps is altogether 83.9 million m³ which could be used for energy production. If complementary fellings were to be 25% of the annual change rate surplus and directed entirely to energy use, 101.6 million m³ of above ground biomass and about 1.2 million m³ of stump wood could be used for energy annually. Thus the available forest fuel totals about 187 million m³ per year, i.e. about 150 million tonnes of fresh wood, which corresponds to about 411 TWh of energy or 36 Mtoe. The study also examined the supply costs of chips made from logging residues in the Czech Republic, Finland, France, Hungary, Poland, Slovakia, Spain and UK. The lowest supply costs were found to be in Finland and the Czech Republic whereas the highest costs were in the UK and France.