Forests and afforestation in a rural development context: a comparative study of three regions in Finland 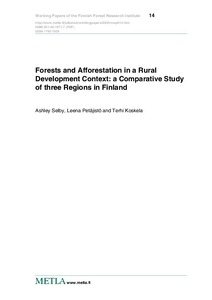 The investigation examines how farmers and rural advisors perceive forests, forestry and field afforestation in the context of rural development in three contrasting rural business districts (RBDs) in Finland: Etelä-Pohjanmaa, Mikkeli and Kuopio. The diversity of socio-economic histories of these districts enables the identification of discourses similar to those identified in Central Europe: Hedonist, community sustainability, agri-rural, nature conservation and utilitarian. Farmers and advisors had different views on the role of forests in the development of their localities. The advisors supported a utilitarian discourse whereas farmers, who are also the local inhabitants, supported community sustainability, hedonist and nature conservation discourses.Farmers' forestry objectives were "Income & financial security", "Conservation of nature and the local milieu" and "Household objectives". None of the objectives were strongly represented in Etelä-Pohjanmaa. "Income & financial security" was strongly represented in Mikkeli RBD. Some 12% of farmers had no specific objectives for their forests, but this figure rose to 18% for farmers in Etelä-Pohjanmaa. Farmers' preconditions for possible field afforestation (public subsidies incentives and private incentives) were assessed for all farmers, irrespective of their current afforestation plans. Overall, farmers' personal incentives were more likely to affect any possible afforestat ion decision than the availability of grant-aid, but the majority (54%) of farmers with afforestation plans were influenced by public subsidies.Advisors in Mikkeli and Kuopio RBDs are aware that afforestation may have negative effects on rural enterprise, but advisors remain unresponsive to the nature-based enterprise and tourism opportunities that can be created from environmental/milieu and non-wood benefits of forests. This must be a cause for concern, particularly as it is accepted that the creation of new jobs in the countryside will come from such enterprises rather than from traditional forestry.