Challenges in roundwood trade between Finland and Russia - a cultural approach 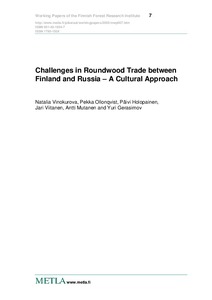 The collapse of the socialistic reign changed the operational environment in Russia dramatically. In the Soviet planned economy, production volumes and prices of forest products were determined by the central planning authority. Furthermore, the Soviet industrial policy promoted large scale forest industry complexes, whose standardised products were supplied primarily to the domestic markets. In free market economy, the privatisation of forest industry enterprises and intensified participation in international business and trade have challenged the Russian managers to adopt new business strategies and to learn a more customer-oriented way of thinking. From the viewpoint of foreign enterprises, the success in business with Russian partners requires profound understanding of the Russian working culture and mentality as well as up-to-date knowledge of the operational environment in Russia.Together with the changes in Russian society and economy, the roundwood trade between Finland and Russia has undergone a structural change. The patterns of bilateral trade agreements in bartering protocols are not working any more. Instead, the trade is organised between the private companies and middlemen both in Finland and Russia. Currently, the imported roundwood, over 80% of which originates from Russia, accounts for about one fifth of the annual roundwood consumption of the Finnish forest industry. As some of the timber assortments cannot be processed in Russia, the trade with Finland also benefits Russia. Therefore, there is a mutual interest to avoid misunderstandings and to improve the business culture in roundwood trade.After a short review of the history and evolution of the Finnish Russian roundwood trade, volumes and distribution of the assortments, this study focuses on the importance of the cross-cultural differences between Finnish and Russian roundwood trade. The study concentrates only on a few theoretical concepts which are closely connected to the cultural differences and are of particular importance in roundwood trade. These concepts are power distance implying how the decision making is distributed in the society, management of time implying the intensity of use of raw materials, and management of quality implying the maximisation of the value-added production. This study is a first stage towards an oncoming questionnaire research on cultural aspects in roundwood trade between Finland and Russia.