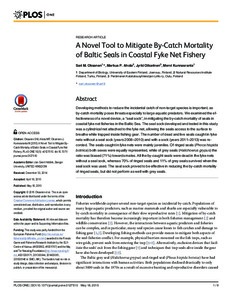 Plos
by
http://journals.plos.org/plosone/s/content-license
Under this license, authors agree to make articles legally available for reuse, without permission or fees, for virtually any purpose. Anyone may copy, distribute or reuse these articles, as long as the author and original source are properly cited. Using PLOS Content No permission is required from the authors or the publishers to reuse or repurpose PLOS content provided the original article is cited. In most cases, appropriate attribution can be provided by simply citing the original article.
doi:10.1371/journal.pone.0127510
Näytä kaikki kuvailutiedot
Julkaisun pysyvä osoite on
http://urn.fi/URN:NBN:fi-fe2016091523763

Developing methods to reduce the incidental catch of non-target species is important, as by-catch mortality poses threats especially to large aquatic predators. We examined the effectiveness of a novel device, a "seal sock", in mitigating the by-catch mortality of seals in coastal fyke net fisheries in the Baltic Sea. The seal sock developed and tested in this study was a cylindrical net attached to the fyke net, allowing the seals access to the surface to breathe while trapped inside fishing gear. The number of dead and live seals caught in fyke nets without a seal sock (years 2008-2010) and with a sock (years 2011-2013) was recorded. The seals caught in fyke nets were mainly juveniles. Of ringed seals (Phoca hispida botnica) both sexes were equally represented, while of grey seals (Halichoerus grypus) the ratio was biased (71%) towards males. All the by-caught seals were dead in the fyke nets without a seal sock, whereas 70% of ringed seals and 11% of grey seals survived when the seal sock was used. The seal sock proved to be effective in reducing the by-catch mortality of ringed seals, but did not perform as well with grey seals.