Baltic Sea nutrient reduction : what should we aim for? 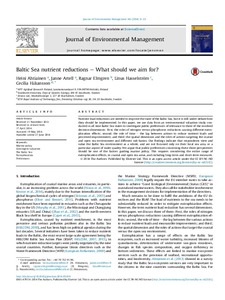 Nutrient load reductions are needed to improve the state of the Baltic Sea, but it is still under debate how they should be implemented. In this paper, we use data from an environmental valuation study conducted in all nine Baltic Sea states to investigate public preferences of relevance to three of the involved decision-dimensions: First, the roles of nitrogen versus phosphorus reductions causing different eutrophication
effects; second, the role of time e the lag between actions to reduce nutrient loads and perceived improvements; and third; the spatial dimension and the roles of actions targeting the coastal and open sea environment and different sub-basins. Our findings indicate that respondents view and value the Baltic Sea environment as a whole, and are not focussed only on their local sea area, or a particular aspect of water quality. We argue that public preferences concerning these three perspectives should be one of the factors guiding marine policy. This requires considering the entire range of
eutrophication effects, in coastal and open sea areas, and including long-term and short-term measures