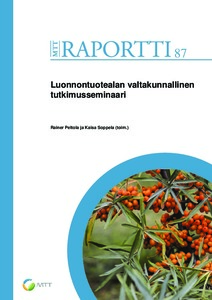 Sea buckthorn (SB) has been a target of scientific investigations at the University of Turku since 1980 s. In addition to taxonomic, chemical and sensory research of the berries, their health effects have deserved special attention. Nutritional effects of both entire berries and of their oil and ethanol soluble fractions have been investigated. Many of the hypotheses were based on Eastern, especially on Chinese traditions, claims and knowledge. Berries in the Scandinavian countries, both cultivated and wild ones, are commonly regarded as health promoting food ingredients also in Finland. The major genera are Vaccinium (bilberry, lingonberry), Rubus (cloudberry, raspberry, arctic bramble), Ribes (currants), Empetrum (crowberry) and Hippophaë (sea buckthorn). Sea buckthorn berries rich in flavonoids, oil soluble antioxidants and vitamin C were shown to lower concentration of the sensitive CRP in plasma. In addition, consumption of the juice indicated increase of the ratio of HDL cholesterol to LDL cholesterol and elongation of the lag phase of LDL cholesterol oxidation. Berries and especially their ethanol-soluble fraction suppressed the postprandial insulin peak. It was further shown, that the bioavailability of flavonoids was increased by coincide supplementation of sea buckthorn oil. The results of consumption of SB thus indicate possible reduction of the risk of cardiovascular diseases in healthy people. Sea buckthorn seed and pulp oils have been of special interest. The very recent studies showed the unexceptionally high protective, antioxidative effects of SB oils on the isolated DNA in vitro. The same was the case with DNA of rat liver homogenate in vitro. Whether the positive effects of sea buckthorn oils on dry eyes and atopic skin have the same mechanistic background, is not known. The oils investigated have all been isolated by aseptic CO2 extraction.