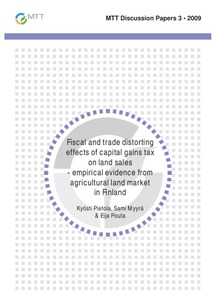 Capital gains taxes are important sources of government income in particular in high tax Scandinavian countries. Theses taxes, nevertheless, likely distort the market and resource allocations through so called "lock-in" effect by discouraging trade transactions that would trigger the tax payments. When it comes to agricultural land, the lock-in effect implies that, along the structural development, the land ownership and active farming gradually deviate from each other and land tenancy increases. Increasing land tenancy and land tenure insecurity have shown to incur a significant social cost, because they discourage and delay irreversible land improvements that would be necessary for maintaining land productivity. Therefore, the knowledge about the trade-off between the level of capital gains taxes, land sales and, thus, the resulting fiscal revenues is valuable in designing optimal tax policies. This study estimates the fiscal effects of reduction in capital gains taxes imposed on land sales and provides grounds for optimizing the tax scheme. The results suggest that certain temporary tax waiver programs could maintain the current tax revenues with less trade distorting effects on the land market. By simulating the land trade quantities conditional on alternative tax rates, the study gives information on how much a particular tax waiver program would trigger land sales. The results signal that tax waiver programs could shift the current structural development pattern of gradually increasing tenancy and land tenure insecurity to a pattern, in which the share of land ownership would be increased.