Muscle-lactate and its transport across membranes in horses: A review 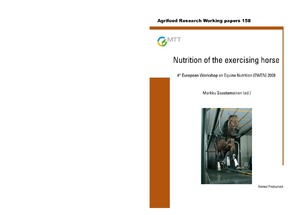 Horses have high oxidative capacity, but during maximal effort a considerable percentage of energy is produced by anaerobic glycolysis as indicated by the production of lactate and protons. To maintain intracellular pH, efflux of lactate and protons is facilitated by monocarboxylate transporters (MCT), which cotransport these two ions. Mainly two MCT isoforms, MCT1 and MCT4, are expressed in equine muscles. Both of these need an ancillary protein, CD147, for full activity and their proper orientation on membranes. Lactate efflux depends also on the proton gradient between muscle and blood plasma, and to keep up this gradient lactate and protons are taken up by tissues that rely on oxidative metabolism, but also by red blood cells (RBC), which during exercise act as a lactate sink. In equine skeletal muscle and RBC the expression of CD147 is bimodally distributed with 25% of standardbred horses showing low expression in comparison to the rest 75%. The lactate transport activity is autosomally inherited with the high activity being the dominant form. Equine MCT1, MCT4 and CD147 have been sequenced, but the polymorphisms in the coding region of MCT1 and CD147 or the promoter region of CD147 cannot explain the differences in the lactate transport activity leaving the reason for differences in lactate transport activity to be solved.