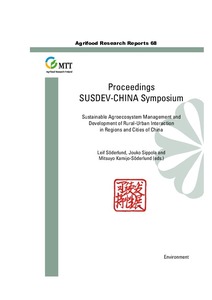 The world has focused on China with great interest in recent years, particularly since its entry into the WTO at the end of 2001. The opening-up policy and economic reforms launched by China in 1978 have enabled the country to become one of the world s largest economies. The Chinese Government has stated that the most difficult problems facing the country today concern agriculture and rural areas. The great challenge for China s agriculture is to ensure food security for the population of 1.3 billion while at the same time coping with the grave environmental problems confronting the country, most of which are linked to shortages of natural resources, severe soil erosion, and water and air pollution. The management of water resources is an issue of great urgency due to the scarcity of water, notably in the main agricultural regions and in the populous cities of North China. Coordinated by MTT Agrifood Research Finland, the project Sustainable Agroecosystem Management and Development of Rural-Urban Interaction in Regions and Cities of China (SUSDEV-CHINA) is a multidisciplinary joint research undertaking of the European Union s International Cooperation programme. The research partners alongside MTT are Imperial College London, Tongji University of Shanghai, and six research institutes of the Chinese Academy of Sciences (CAS): the Research Center for Eco-Environmental Sciences, the Institute of Geographical Sciences and Natural Resources Research, the Institute of Policy and Management, the Institute of Genetic and Developmental Biology, the Institute of Soil and Water Conservation, and the Institute of Earth Environment. Within the SUSDEV-CHINA project, we are studying the main issues of agroecosystem management and rural-urban interactions as related to water management, land use, and human welfare in five heavily populated regions and three major cities of China. An important milestone in the progress of the project was the SUSDEVCHINA Symposium held in XiŽan on 2 - 4 August 2004. XiŽan with its surrounding area has been at the very heart of China s history. The city served as the capital seat of twelve dynasties for more than 1100 years and its Wei Valley is the legendary birthplace of Chinese civilisation. The symposium had three principal themes: 1) Agriculture and Ecosystem Management, 2) Rural-Urban Interaction: Water Technology and Water Resources Management, and 3) Sustainable Socio-Economic Development. The symposium brought together experts on a wide range of issues related to the transformation of Chinese agriculture, the efficient management of scarce water resources, and the socioeconomic impact of the strengthening economy. The symposium proceedings contain papers addressing a great variety of topics, for example, water-saving agriculture techniques aimed at ensuring food supplies; agricultural production in the North China Plain; soil erosion prevention and ecosystem reconstruction in the Loess Plateau; water resource management in China as a whole and in the cities of Shanghai and XiŽan in particular; the economic development of China and its impact on the world economy; the relation between migrant distribution and socio-economic change in the regions of China; the loss of cultivated land due to urbanization; China s WTO membership and reform of the grain circulation system; and problems inherent in China s rural financial system. Regardless of its contribution to the economy, the role of agriculture and the agri-food sector remains a central policy issue and a major consideration in relation to rural development and environmental policies. These proceedings offer the reader the fruits of timely analytical and strategic thinking on sustainable development in a global perspective and views on the most important policy issues for the future of China.