Development and use of markers for oil in oats 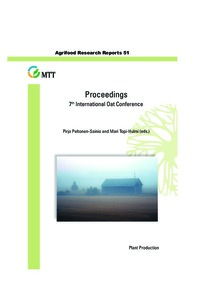 Understanding and manipulating the genes for oil content are important objectives for breeding modern oat varieties. In particular, naked oats with economically acceptable yields, dwarf straw and significantly higher oil levels are a target for the poultry industry. Oil and protein content was determined from a range of oat genotypes and microsatellites used to obtain information on their genetic relatedness. A number of candidate crosses were made and these were cytologically screened to check for anomalies of segregation by observing chromosome pairing at meiosis in F1 hybrids. An F2 population between a spring high oil source (N327-6, from Iowa) and a dwarf winter naked variety (Hendon) was grown and found to display variation for a number of important characteristics in addition to grain oil content.Interestingly, there were examples of progeny that were naked grained, dwarf, early flowering and with high grain oil content. Use of the dwarf character in breeding programmes has been relatively limited until recently as it has been associated with a number of poor agronomic traits for example late maturity, incomplete extrusion of ears from flag leaves, small grains, poor kernel content and poor resistance to disease. Analysis of this mapping population indicates that we can we can break these apparent linkages and dissect these traits into their components. We are using a number of approaches to identify and develop markers associated with traits of interest; candidate genes have been identified and used to generate alignments of homologous EST and genomic sequences from the Poaceae entries in Genbank. Primers based on conserved targets flanking one or more introns have then been used in PCRs with our parental lines. Polymorphisms have typically been found at frequencies between 1-5%, allowing us to readily identify single nucleotide polymorphisms (SNPs) in genes in the oil biosynthesis pathway. For genes of particular interest, such as ACCase and KAS, we have then established allele-specific PCRs, further simplifying the screening process. This work holds great promise for the development of rapid and precise marker-assisted selection for oil content.