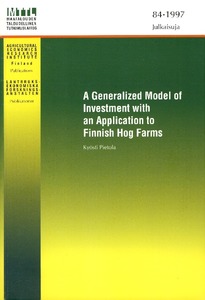 This study develops a method for estimating a generalized investment model. Irreversible investment behavior is allowed to arise either from generalized adjustment costs, uncertainty, or both. The model is estimated using data for a group of Finnish hog farms over the period 1977-93. Two out of four decision variables are allowed to obtain zero value with positive probability. The sample is endogenously partitioned into the regimes of zero and positive investments (four regimes in total). Then, the decision rules are estimated using the Full Information Maximum Likelihood (FIML) method. The model has a similar structure as the censored Tobit model. The goal of the study is to find out the effects of frictions caused by uncertainty, irreversibility, and adjustment costs on investments in Finnish hog farms. External restrictions, such as liquidity constraints caused by credit rationing are also studied. The study's main goal is to obtain estimates for adjustment rates, elasticities, and shadow prices such that we account for the fact that optimal investments may be zero. The results suggest that there are scale economies among Finnish hog farms and, in addition, scale effects in their investments. Thus, production costs per unit decrease as the amount of production increases. The instantaneous cost function is decreasing in investment so that larger investments will result in lower adjustment costs. These results suggest that Finnish pork producers have potential for improving their competitiveness by establishing large production units through drastic expansions. It is expected that the Finnish hog industry has the potential for reaching the average cost level of Danish hog industry in 1995. Reaching the Danish cost level, however, will require Finnish production units to at least triple their size. Tripling the average firm size while keeping the aggregate production capacity constant, as required by hog adjustment programs, implies that two thirds of the current producers will need to exit the industry. Over a five year period, for example, this would require an exit rate of 8 % per year, which is almost twice the 4.3 % average exit rate of 1996 in Finnish agriculture. Therefore, it is expected that an inflexible labor market, combined with excess labor in farming, will delay the substitution of capital for labor and slow down the whole adjustment process. The shadow price estimates show that Finnish hog farms have had excess capital relative to their exogenously restricted production levels. Hog farmers appear to have unconstrained access to capital. It is expected that increasing firm size will eventually result in more efficiently utilized and allocated farm capital. Still, low returns to farm capital cause severe difficulties in the farmers' adjustment to new market conditions. The results provide evidence that farm investments have been made with too low returns to capital or, alternatively, additional incentives for investments have been provided, for example, through investment programs or through tax shields. Because the hog industry exhibits substantial economies of size, environmental regulations combined with rigidities in the local land markets are expected to have increasingly important effects on the development of hog industry structure and production costs.