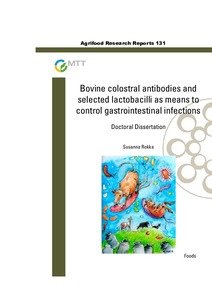 Streptococcus mutans and Helicobacter pylori belong to the most common bacterial pathogens of humans. They infect more than 50% of the world s population. Further, enterotoxigenic Escherichia coli (ETEC) is regarded as the most common bacterial cause of diarrhoea worldwide. Colostrum is essential for a newborn by providing nutrition but also immunological protection. Immunoglobulins and complement system are considered as the major antimicrobial agents in bovine colostrum. By immunizing a cow it is possible to produce specific antibodies in serum and lacteal secretions against microbes. These antibodies have proven effective in preventing many gastrointestinal microbial diseases. Probiotic bacteria are often used in fermented dairy products because of their beneficial effects on human health. Some probiotic bacteria, especially lactobacilli, can inhibit growth and colonization of pathogens. Probiotic bacteria like Lactobacillus rhamnosus GG (LGG) also reduce the side effects of antibiotic treatment. The aims of this study were to investigate the effects of bovine colostrum and specific colostral antibodies, and some lactic acid bacteria on gastrointestinal infections, especially H. pylori induced gastritis and dental caries caused by S. mutans. The effect of colostrum on the activity of the complement system in neonatal calves was also studied. It was possible to increase substantially complement and opsonization activities of serum by feeding colostral whey concentrate to neonatal calves. A colostral immune preparation (IP) containing specific antibodies against H. felis prevented but did not eradicate an experimental H. felis infection in mice. However, the IP combined with amoxicillin lowered the level of inflammation and colonization more than amoxicillin alone. The specific anti-cariogenic antibodies of IP remained active and functional when added to UHT milk or fermented with LGG and stored for an extended time. Further, the combination of IP and LGG prevented the adherence of S. mutans effectively. Lactobacillus plantarum MLBPL1 isolated from sauerkraut showed anti-Helicobacter activity mainly associated with cell wall, from where it can be extracted 5 into the culture supernatant. Colostral preparations, and acidifying microbes (L. plantarum MLBPL1 and LGG) reduced the adhesion of H. pylori on human gastric adenocarcinoma cells. They also reduced the IL-8 production of the infected cells. IL-8 secretion is a primary response to H. pylori infection. Supplementation of an antibiotic treatment with a food product containing probiotic lactobacilli and/or IP could offer a potential complementary means to suppress gastrointestinal infections.